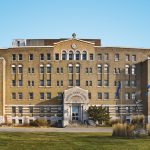 Call it the west end’s best kept secret. Call it a precious jewel in the McGill University Health Centre (MUHC) network. Call it what you want, but for people who know the Lachine Hospital, it’s no surprise at all.

A primary and secondary care institution, the 104-year-old Lachine Hospital has long flown under the radar of Anglo Montrealers, despite its location a mere kilometre southwest of the 1st Avenue exit off Highway 20.

In a quiet, mixed residential and commercial zone, the hospital has earned a solid reputation for its specializations in bariatric surgery, ophthalmology, and even sports a long-term care residence, the Pavillon Camille Lefebvre, which has 114 regular beds, and 20 respiratory care beds transferred from the Montreal Chest Institute. This makes it the only long-term care centre in the province equipped to handle long-term respiratory care patients.

“A lot of people out there, particularly Anglophones, don’t know much about the hospital,” says Monica McDougall, executive director of the Lachine Hospital Foundation. “That’s because up until it became part of the MUHC in 2008, it has traditionally been a Francophone community hospital.”

It maintains its tradition as a community hospital and has even strengthened that culture she says, “even though we are integrated into the MUHC. You’re in really good hands here.”

Even though Lachine Hospital is a recognized centre of excellence for bariatric surgery in Quebec, patients often had to go elsewhere to have an MRI. In 2015, the hospital received an extra special arrival, a special MRI unit built to accommodate claustrophobic patients and morbidly obese clientele. The $1.5 million machine is larger than traditional MRI units, and had to be lowered and installed through the roof with the help of a crane. The machine, which required a whole imaging unit to be built around it, allows the hospital to serve not only their patients but claustrophobic patients throughout the entire McGill University network, as per a provincial service corridor.

“The imaging department is our pride and joy,” says Bruno Poudrier, manager of Ambulatory Services and the Nursing Resource Centre, adding the hospital’s record on bariatric surgery of three types — bypass, ring and tie — is impressive. “We do about six per week,” he says, adding that there are four surgeons on rotation.

The 156-bed hospital is a leader in ambulatory care, with nearly 5,000 day surgeries and a staff of 670, including 125 doctors and 195 nurses. The emergency department received 20,583 visits last year, but Lachine is not a trauma center. “Those walk-in trauma cases are immediately dispatched to the Glen (site of the MUHC),” says Poudrier, adding stroke cases are dispatched to the Montreal Neurological Institute through a service corridor.

With some 15,000 yearly ophthalmology clinic visits, Lachine Hospital has established itself as a centre of excellence for this increasingly needed care, performing almost 5,000 cataract surgeries a year.

“We met our goal last year,” he says. “That’s almost 100 a week… Cataracts are very fast surgeries has evolved so quickly, using ultrasound to destroy the cataract, quick incisions, it’s a matter of minutes.”

Last year the provincial government announced a long-awaited $75 million upgrade of the hospital, which will include renovations to the current 77-year-old structure and construction of a new wing, which among other things will house the new emergency department and expanded palliative care unit.

The burgeoning ophthalmology clinic, whose waiting room holds merely 12 chairs, will be expanded greatly once it takes over the space occupied by the current ER.

Construction is expected to begin in 2018, and enhancements for the current building will include upgraded standards for security, infrastructure and infection control, with improvements to the hemodialysis unit and long-term respiratory care centre

The dialysis unit at the Camille-Lefebvre features 16 comfortable stations that were transferred from the Royal Victoria, and it’s a valuable resource for area patients and those in the West Island who appreciate the easy access and parking, Poudrier explains.

As government budgets continue to tighten, increasingly it’s up to organizations like foundations and their supporters to fill in the gaps for important community care, and that’s the case with the Lachine Hospital Foundation, which, in addition to its ongoing mandate to secure much needed medical equipment, most recently furnished a family lounge outside the palliative care unit.

The foundation is now setting its fundraising sights on a major initiative next month at the Montreal Airport Marriott In-Terminal Hotel; a gala featuring a gastronomic event prepared by internationally renowned chef Jérôme Ferrer and hosted by Quebec television personality Chantal Lacroix. Guests at the May 6 event will enjoy six-courses while being transported back in time to celebrate the 350th anniversary of Lachine and the 125th anniversary of the city of Dorval.

This original article appeared via The Suburban, here:
http://www.thesuburban.com/life/health/lachine-hospital-may-be-the-west-end-s-best-kept/article_195da68a-be15-545b-9836-ce121a72e30e.html